An Open Letter To Non-Vaccinating Parents

I get it. You want the best for your children. You’ve done your “research” and you’re staunchly defending it all over the internet and Facebook. You’re proudly part of the “non-vaccinating parents” club.

An Open Letter To Non-Vaccinating Parents

You’re posting your indignation at California’s removal of their religious exemption for vaccines. And you’re mad because that was the exemption that you were planning on using. 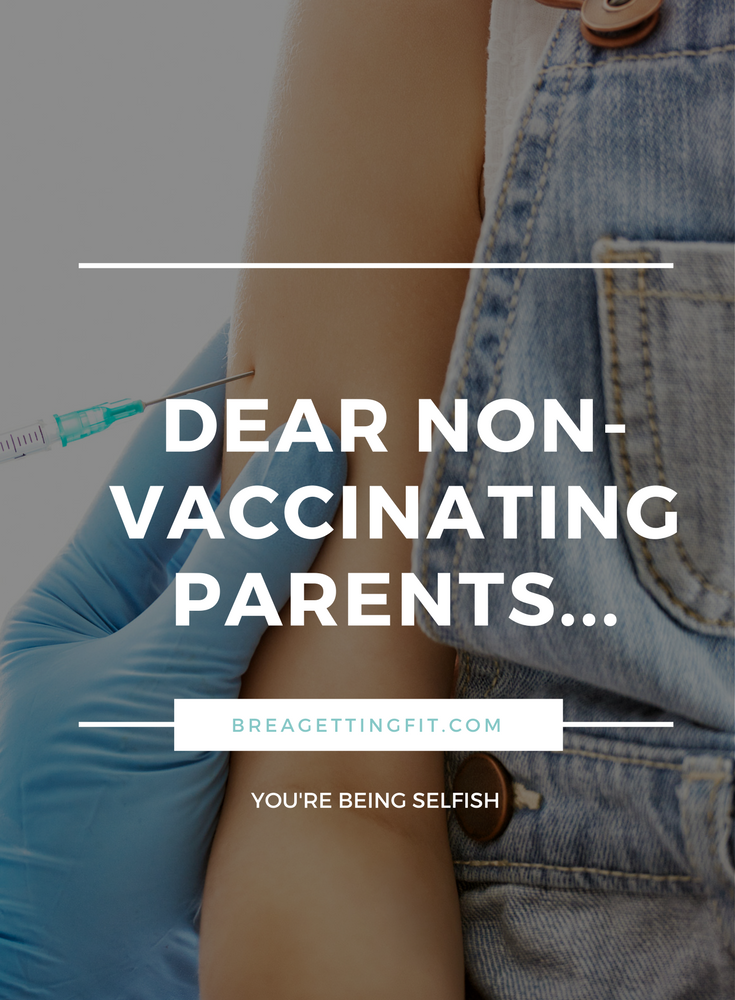 Now, let’s think about this a minute. They’ve removed religious exemption. I understand that there are some religions that do not allow vaccinations. While I don’t agree, as a Christian, I support their doctrine.

But if you take a closer look?

Of all the major religions, only one expressly forbids vaccines.

To say that the vaccines contain a significant amount of human fetal tissue, as some objectors to the vaccines claim, is misleading, stressed Dr. Paul Offit, the director of the vaccine education center at the Children’s Hospital of Philadelphia.

“There are perhaps nanograms of DNA fragments still found in the vaccine, perhaps billionths of a gram,” he said. “You would find as much if you analyzed the fruits and vegetables you eat.” source

Oh, and the Dutch Reformed Church isn’t fairing so well:

“Despite vaccination coverage over 95%, a measles outbreak started in May 2013 in the Netherlands. As of 28 August, there were 1,226 reported cases, including 82 hospitalisations.

A unique outbreak control intervention was implemented: a personal invitation for measles-mumps-rubella (MMR) vaccination was sent for all children aged 6–14 months living in municipalities with MMR vaccination coverage below 90%.” source

While I’m at it, what about other exemptions? I’m all for medical exemptions. In fact, Smalls has one because of his Severe Aplastic Anemia. The key to these are the doctors’ notes, y’all. And medical exemptions are very, very hard to get. And it’s not one you want, because it means that you are incapable of fighting off the vaccine. Think Cancer, y’all.

What about philosophical, conscientious, or personal exemptions? There are only 17 states that currently offer such exemptions. If you go this route, you can’t pick and choose. You need to refuse all vaccines. And I can’t for the life of me understand why you would do that.

Now that we’ve established that your religion probably supports vaccines, you don’t qualify for a medical exemption (and if you do, I’m sending you a huge, huge hug)…you must be not vaccinating because of a philosophical or personal choice. Awesome.

Maybe you’re mad because the recent vaccine debate interferes with your definition of “health.”

Want to know why this gets my panties in a twist?

These Diseases Haven’t Been Eradicated

In the words of one of my favorite people, “NO. YOU’RE WRONG”. Smallpox is the only vaccine-preventable disease that no longer exists on the planet, and the rest of them were pretty scary pre-vaccine: 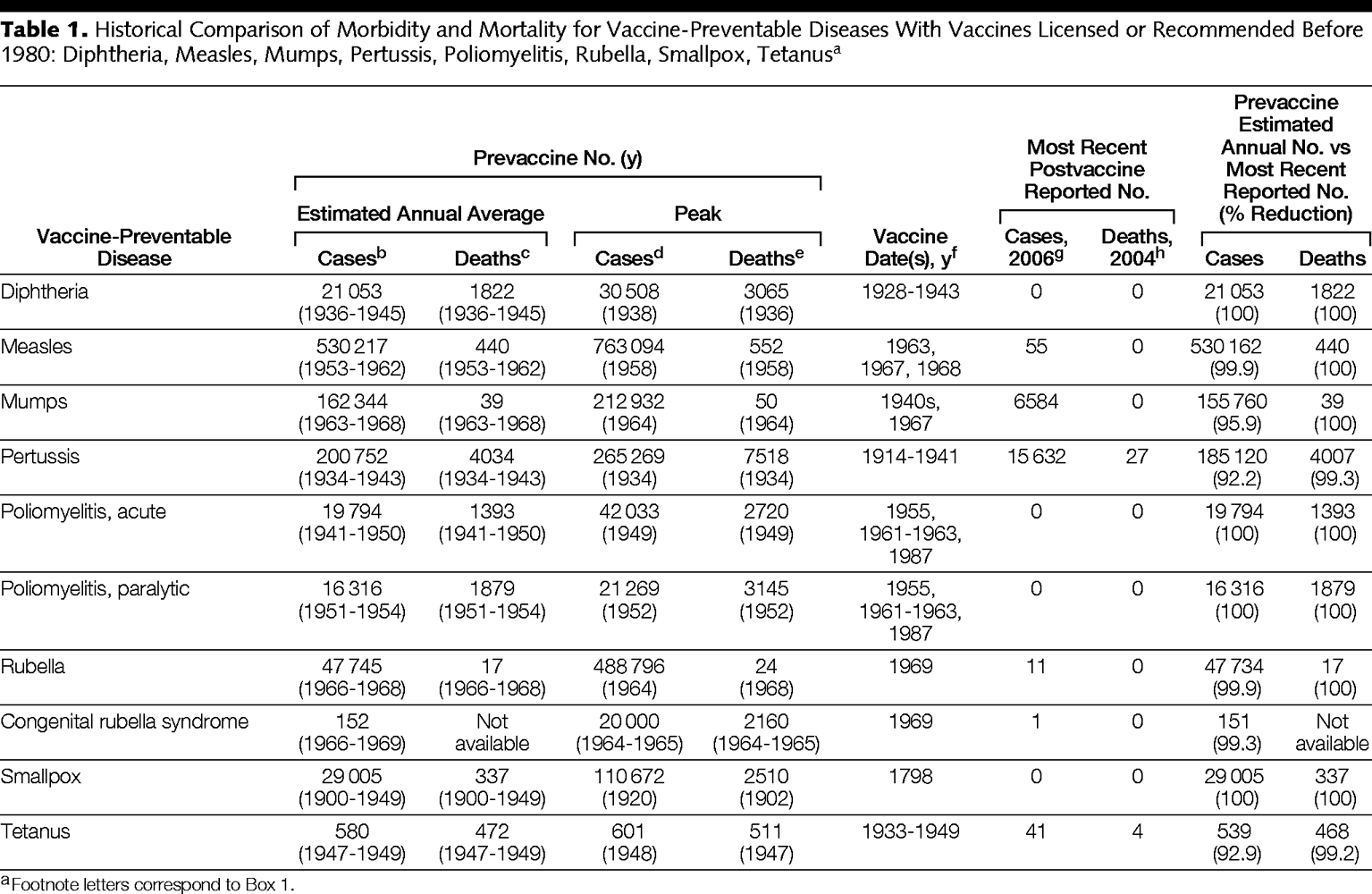 I’m not making these numbers up, y’all. These are from peer-reviewed publications. And let’s clear one thing up, a peer review is the process by which a scholarly work (such as a paper or a research proposal) is checked by a group of experts in the same field to make sure it meets the necessary standards before it is published or accepted.

They are not paid for. They’re are not sent to “big pharma”. Peer reviewed means they are read, edited, and fact-checked by multiple experts. These are people with doctorates in microbiology. Science, people.

And although we may not see a polio outbreak here in the U.S. (God willing), it’s still paralyzing children in other countries. Polio isn’t harmless. The most serious form of polio is paralytic polio. It affects the spinal chord, brainstem, or both. Oh! And let’s not ignore post-polio syndrome, which can occur 35 years after the initial polio virus has “left” your body. Post-polio syndrome can cause sleep apnea, muscle weakness, depression, loss of memory, and muscle atrophy.

In fact, none of the diseases that we now have vaccines for are “harmless”. Sure, chicken pox may seem like “just a rash”. After all, I had chicken pox and lived.

I’m betting you did, too. Did you know that there are serious complications that can occur from something with the word “chicken” in the title? Like inflammation of the brain, pneumonia, sepsis, bone infections, joint infections, and toxic shock syndrome (yup. the same reason your mother wouldn’t let you use tampons as a teen.), just to name a few. Oh, and death. Yup. Deaths from chicken pox continue to occur in the unvaccinated population.

Or what about Mealses? Well, it can be a rash, kind of like chicken pox. But in some cases, it can lead to brain damage, deafness, and death. Sounds like a good time to me. I think I will go get another MMR booster just to be safe.

I could go on, but I think you get my point. Why would you want to risk potential long-term, permanent harm by subjecting your child (and it’s not just your child or your family, by the way!) to these diseases that we should not have to worry about?

Personally, it’s not a risk I’m willing to take. But wait! You’re worried about those scary and harmful ingredients that are in the vaccines, aren’t you? Well, lucky you, I did some research, and you know what I found? You are far more likely to be harmed simply by doing every day activities…like drinking water. Yup. The ingredients in vaccines aren’t that scary.

And let’s not forget about this gem. People fear what they don’t understand, and it’s really, really easy to jump on board with someone who appears to have done so much tedious research. They must be really smart!

Except they’re not. And, in fact, most of the fear-mongering done by bloggers that list vaccine ingredients and equate them to deaths or severe impairment are forgetting the bedrock of pharmacological science: The dose makes the poison.

If we use this faulty logic and apply it to other items in our lives, we should all probably stop drinking water RIGHT.NOW. Because drinking too much water can kill you.

I know you feel vindicated doing your research through The Google, but honestly, how many of those articles are peer reviewed or scholarly? Because I couldn’t find ONE.

In an interview with CNN, Dr. Bob Sears (yes that one), God Bless Him, claimed that between 3,000 and 4,500 people [per year] report severe vaccine reactions that “land somebody in the hospital, the intensive care unit or cause a permanent disability or death.”

Let me back up for a second. VAERS (for those who don’t know) is the Vaccine Adverse Event Reporting System. But wait. Anyone can access it. You, me, your neighbor, the doctor, a nurse…. And when you view data from VAERS, you receive this warning:

“When evaluating data from VAERS, it is important to note that for any reported event, no cause-and-effect relationship has been established. Reports of all possible associations between vaccines and adverse events (possible side effects) are filed in VAERS. Therefore, VAERS collects data on any adverse event following vaccination, be it coincidental or truly caused by a vaccine. The report of an adverse event to VAERS is not documentation that a vaccine caused the event.”

To me, that means that there’s absolutely no proven cause and effect link.

Add to that the potential for double reporting, and well…

“There’s absolutely no linkage between cause and effect,” Catherine Troisi, an infectious disease epidemiologist at the University of Texas Health Science Center, told us. “If I received the flu vaccine yesterday and got hit by a bus today, I could enter that into VAERS.  But I doubt anyone would say the vaccine caused the accident. VAERS is a great reporting system to look for trends that would trigger further studies – but it does not pretend to prove that the conditions entered are related to vaccination.” source

If you actually look at the 2014 data, Dr. Sears claim doesn’t hold water. Additionally, if you look at the VAERS data, you’ll notice that many of the adverse claims that were serious, according to Dr. Sears were from people who already had another health issue. You can read more about this misinformation here.

So. You tell me…was it the vaccine or the bus? While we’re talking about serious health issues, I want to point something out to you.

And if you think they do, you’re either stupid or selfish. Either way, you need to realize that the whole point of vaccines is herd immunity. Which means that the majority of the population has received their vaccinations and are, in effect, immune.

Because, in the end, vaccines also protect:

This may be so far removed from your life that you don’t understand why I’m on my soapbox. Let me break it down for you: a year ago, Smalls (5) was diagnosed with something called Severe Aplastic Anemia. This means that his bone marrow stopped working. By the time we caught the bruising and got him into the hospital, his CBC (complete blood count) levels were so low that he needed multiple blood infusions so his body wouldn’t shut down.

You know what the first thing the doctors asked me before putting an IV in my baby’s arm? If he was fully vaccinated. They wanted to be sure that he was up to date because there’s always a risk. Thank heavens he was.

Over the past year, I’ve watched my baby receive more than 20 bags of blood and platelets. I had to sign a waiver every.single.time. stating that I knew the risks.

But it’s a choice: help my child live or watch him potentially slowly get worse (and we definitely do not want worse). The best part? The only cure for SAA is a bone marrow transplant. That comes with a whole other set of scary warnings.

What Does This Have To Do With You (Non-Vaccinating Parents)?

The mere fact that you’re “scared” of the “toxic” ingredients, or claim a faulty “religious” exception isn’t good enough for me. Yes, there are people out there who do have bad reactions to vaccines. I have a very dear friend whose baby cannot have the MMR vaccine because of a similar reaction. But he is vaccinated for everything else.

She chose to protect not only her child, but also yours and mine. So when you tell me that you “just don’t believe in it” or you have “evidence” of the potential harm, I get it. You’re scared. But if you look at the number of severe vaccine injuries against the total number of vaccinations performed, it’s miniscule.

So for the love, please, please, do some real research. Get educated, and get your kids vaccinated.

*Edited to add: I am happy to discuss this, but please be civil in your comments. Do not post entire articles, please just provide a link to your sources.