Is Coconut Oil Good or Bad?

I use a lot of coconut oil.

I have a jar in my kitchen, one in my bathroom, and even one in my office. I use it on my body (not my face), in my coffee, and of course in my cooking.

But. Is it all just a fad? I’ve been waiting for the coconut oil craze to die down, but it hasn’t.

I shouldn’t be surprised. Even Kopari got on the bandwagon and sells “moisturizer” that is essentially just coconut oil. For like $30.00.

Crazy, right? But honestly what I want to know is this:

Is coconut oil good or bad? Should I restrict its use or get rid of my stash? I did some research over the past couple of months that I think may help you out (thanks, Dr. Google!). 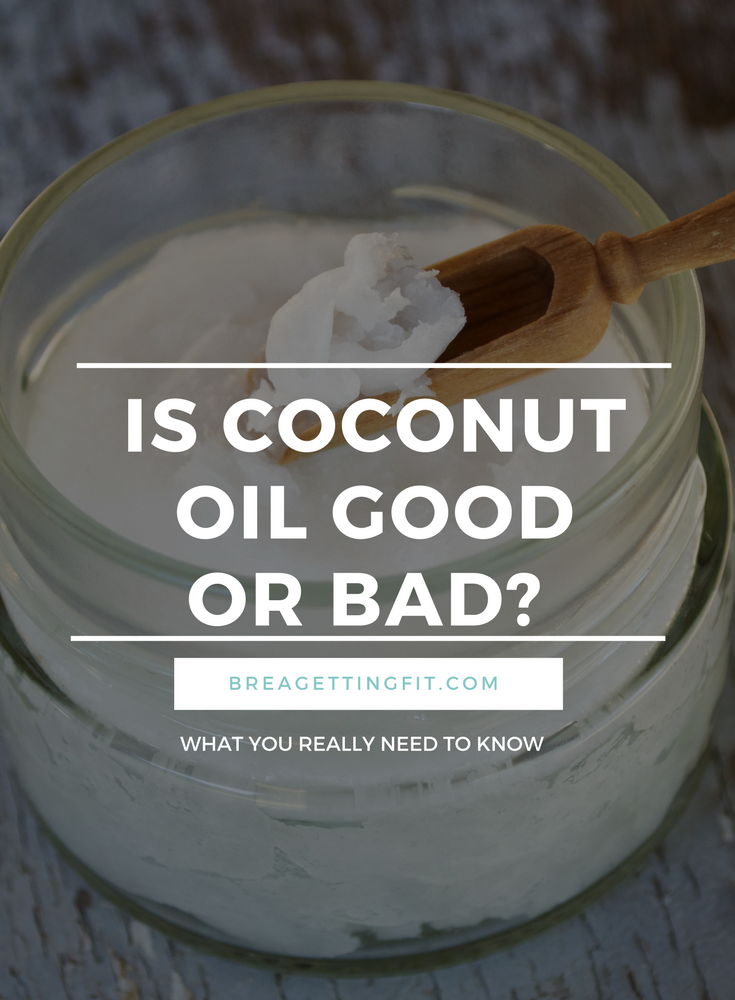 Coconut oil contains the same 9 calories per gram as other fats.

It is extracted from the “meat” of the coconut. This is the white part that also makes delicious chips, but that’s another post.

Coconut oil is solid at room temperature and easily melts into a clear liquid when it gets above 76 degrees. Interestingly, when I lived in Texas my coconut oil was very rarely in its solid state.

What makes MCTs (medium chain triglycerides) unique is how your body metabolizes them.

It’s really pretty cool. MCTS are easily absorbed into the bloodstream from your gut.

Once they’re in your bloodstream they go straight to the liver, where they’re burned for fuel or converted into something called ketones.

This metabolic process, unique to MCTs, is what sets coconut oil apart from other fats.

A whopping 65% of the fat in coconut oil is MCT.

MCTs have been shown to have a few different fat loss benefits.

MCTs may help to increase feelings of fullness, which can lead to a natural reduction in the amount of food you eat.

Because of their unique metabolic route, MCTs increase the number of calories you burn.

A few studies have shown that coconut oil may increase the number of calories burned by as much as 5%.

Some studies show that eating coconut oil can help reduce belly fat (also known as visceral fat). This is the kind of fat that puts you at risk for heart disease, so this is good news!

How Much is Too Much?

Though coconut oil does some amazing, wonderful things, most of the studies that I looked at found that you only need about 2 tablespoons of coconut oil per day.

That’s really not that much, especially when you consider that you probably should reduce other oils that you are eating to make room.

I only purchase organic virgin coconut oil. This means that the oil was processed at a lower temperature and did not come in contact with chemical solvents.

When they refine coconut oil they actually use chemicals to pull apart the oil at its molecular level, which may tamper with the oil’s natural goodness.

Hydrogenated oils (of any kind) are a health nightmare because they contain trans fats. YUCK!

When cooking with coconut oil, you want to make sure that you avoid its smoke point, which for virgin coconut oil is 350-degrees Fahrenheit.

Basically, that means you can safely use it to cook with on a low to medium setting, as well as in most baking.

If you want to try using coconut oil, start by substituting some of the fat you eat with virgin coconut oil, and gradually increase the ratio.

I honestly don’t have any other oils in my cupboard anymore.

Do you use coconut oil in your home?