Common Endocrine Disruptors (+ How to Avoid Them)

I recently told you all about why I partnered with Beautycounter and about their famous Never List. I knew beforehand how prevalent the toxins they have chosen to remove from their makeup and skincare were in other brands. The list of additives they decided not to use were bad stuff. I had no idea how many common endocrine disruptors there were out there!

Common Endocrine Disruptors (+ How to Avoid Them)

But y’all – they are seriously BAD STUFF!

Many of the toxins Beautycounter has chosen to remove are endocrine disruptors. And endocrine disruptors play all kinds of tricks on your hormones. We’ve talked about the major role hormones play in our bodies. You do NOT want to be messing with them!

But what exactly do the endocrine disruptors do to the hormones in your body?

Basically, wreak havoc throughout your body and, in turn, your life. source 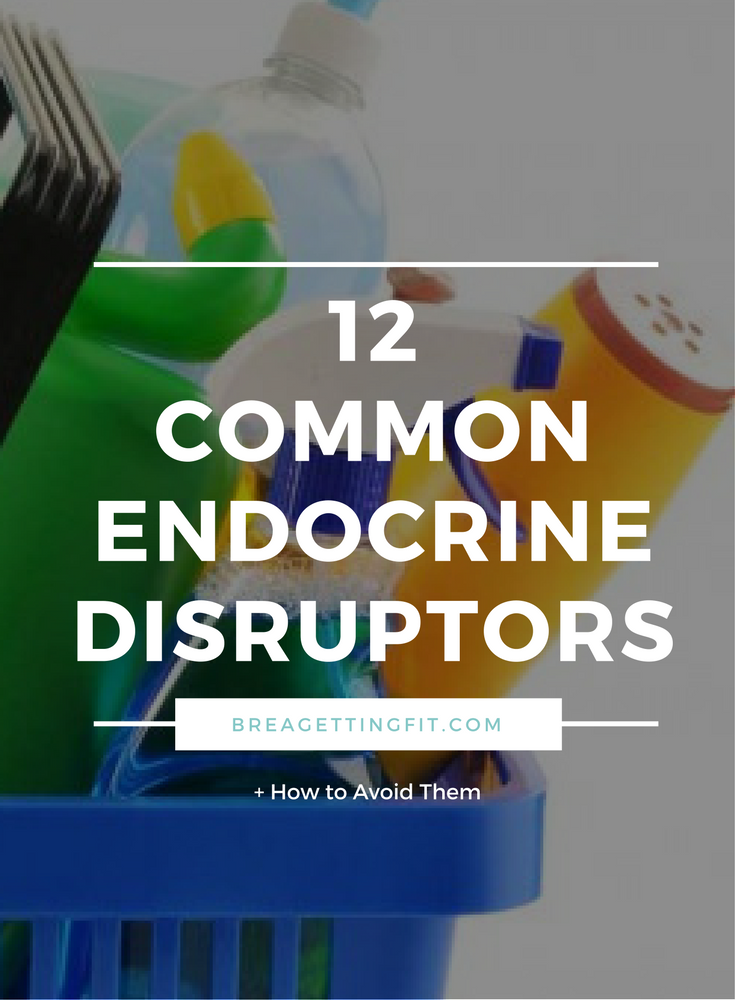 Now that you’re totally freaking out by what may be happening in your body, let’s talk about some of the main contenders. The Environmental Working Group calls them the Dirty Dozen Endocrine Disruptors.

This relatively well-known chemical used in plastics imitates the sex hormone estrogen. It can affect everything from breast cancer to reproductive issues to early onset of puberty. What’s worse? A whopping 93% of Americans tested positive for this chemical.

How to avoid: Stick with fresh foods as opposed to canned, as the can linings often contain BPA. Also, check any plastic containers and avoid those made with #7. If you do use canned items like, make sure they do not contain BPA.

This chemical is formed through many industrial processes and disrupts hormone signaling in both males and females. Exposure in the womb can lead to lower sperm quality and quantity during a man’s reproductive years.

How to avoid: This one is difficult as much of America’s food supply is contaminated. You can lower your exposure by eating fewer animal products, however.

Atrazine has been used on the corn crop and thus has invaded much of our drinking water. It has been linked to breast tumors and prostate cancer.

How to avoid: Buy organic produce and filter your water with a filter approved to remove atrazine.

It’s completely normal for up to 50 billion cells to die in your body every single day. But this chemical causes even more cells to die – particularly testicular cells. Hormone changes, low sperm count, low motility, and thyroid irregularities have all been linked to phthalates.

How to avoid: Steer clear of plastic food containers and be particularly careful when purchasing personal care products (or just frequent safe brands like Primal Life Organics and Beautycounter).

This rocket fuel component unfortunately contaminates much of our milk and produce. Perchlorate in your body competes with iodine, which your thyroid needs to regulate your hormones. For adults, this can throw off your metabolism, but it’s even scarier in growing children whose brain and organ development can be affected.

How to avoid: A reverse osmosis filter will remove it from your water, but it’s impossible to avoid in food. Instead, make sure you are eating foods high in iodine to offset it’s harmful effects.

These prolific chemicals are known to have contaminated humans and wildlife around the globe. Fire retardants imitate thyroid hormones causing many aspects of health to be disrupted. While they are being phased out, it’s going to take a while for us to not be feeling some of their effects.

How to avoid: This one is nearly impossible to completely avoid, but you can reduce your exposure by using HEPA filter vacuum cleaners and taking care with old foam while reupholstering or updating carpets.

If you’ve heard of nothing else on this list, you’ve definitely heard of this one! Lead is harmful to nearly every system of the body; it is a known contributor to lower IQ, brain damage, miscarriage, premature birth, kidney damage, high blood pressure, stress, hearing loss, and nervous system damage.

How to avoid: Keep your home clean and maintained and be especially vigilant with any peeling old paint. To remove lead from your drinking water, a good filter will help.

You probably already know that ingesting too much arsenic can kill you. Smaller amounts can cause cancer to develop too. Lesser known is the fact that arsenic interferes with the hormones that help our bodies process sugars and carbohydrates, which could lead to diabetes.

How to avoid: Arsenic is another that can be removed by using a high-quality water filter.

This toxic but naturally occurring heavy metal has found it’s way into our oceans due to burning coal. When you eat some seafood you ingest Mercury. It’s particularly harmful when eaten by pregnant women. Fetal brain development is imposed by mercury concentrating in the developing brain. Mercury also interacts with hormones that regulate a women’s menstrual cycle.

How to avoid: Choose wild salmon or farmed trout when you’re eating seafood as they are shown to have lower mercury levels.

These chemicals used to make non-stick cookware can affect sperm quality, birth weight, kidney disease, thyroid disease, as well as high cholesterol and more. The scariest thing is some of these PFCs don’t break down – EVER! Once you are exposed to them, they’ll be with you until the end.

How to avoid: Ditch non-stick pans and avoid water resistant coating on clothes, furniture, and floors.

These insect killers contribute to lowered testosterone and thyroid hormone alteration.  Unfortunately, they are one of the most often used pesticides on the market today.

How to avoid: Buy organic produce whenever possible, particularly paying attention to the Dirty Dozen.

When rats were exposed to glycol ethers, the males experienced shrunken testicles? While that effect hasn’t been shown in humans, I think most men would say they’d rather not take that risk! It has been proven to lower sperm count. Plus it might contribute to allergies and asthma in children.

How to avoid: Pay particular attention to your cleaning products and avoid any containing EGBE or DEGME.

I realize looking at this list and reading everything these toxins are in and their effects are completely overwhelming. I don’t want you to totally freak out! Instead, start small.

Choose one of the ways to avoid some toxin exposure from your daily life at a time. With many small changes, you will soon be making huge strides towards lessening the chemical exposure your family experiences.

Need to get the yuck out of your home stat? Try some natural cleaning options. You can also change up your skin care routine with natural ingredients.

Did you know that there were so many endocrine disruptors in your home?

Do You Know What’s in Your Makeup?