This week I did something I avoid at all costs…I got groceries with both kids in tow.

I prepped them both for the behavior I expected – keep your hands to yourself, you will be allowed to pick ONE snack, use your inside voices (does everyone have to do this?!).

Then I informed them that if they followed the rules, we’d get salmon AND shrimp for dinner.

Then I laughed at how silly that would probably seem to anyone overhearing (see?!). But y’all, my boys LOVE seafood. It was a way better bribe than candy at the register would have been.

Living close to the coast, I’m lucky that seafood is abundant and fresh. I have plenty of options, but I know that’s not the case for everyone.

So for those of you living in a land-locked state, I’ve got some tips for making good decisions at the seafood counter.

The Importance of Eating Seafood

The American Heart Association recommends eating at least two servings of fish every week. You particularly want to focus on fish high in omega-3 fatty acids like salmon, mackerel, and albacore.

And if you’re pregnant, you have the added benefit of those healthy fatty acids aiding in the brain and visual development of your growing baby. (You do need to keep an eye on the mercury level of any fish you eat, however.)

All fish, whether farm-raised or wild caught, has nutritional benefits.  They’re high in protein while being low in saturated fats (and therefore calories). 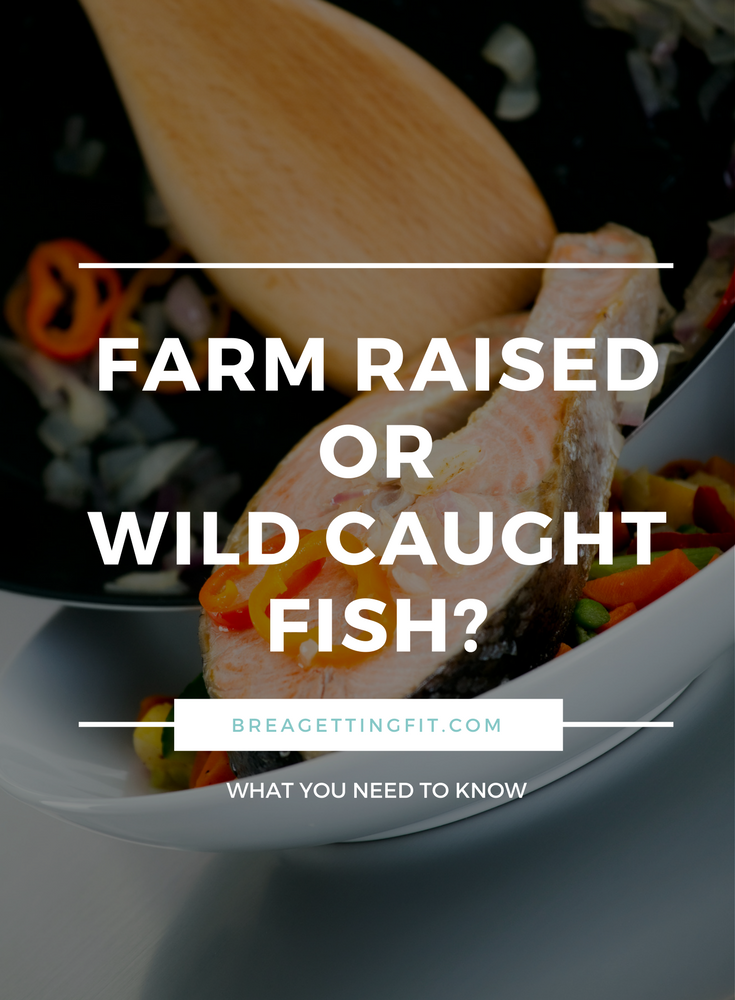 Although I’ve made a decision for my family regarding farm-raised versus wild-caught fish, there are many factors that come into making those decisions.

While it depends greatly on the type of fish, comparing the nutritional profile of wild-caught against farm-raised fish often come out basically the same.

For salmon, wild-caught is lower in calories and higher in iron. However, farm-raised salmon is higher in omega-3s and vitamin C. They have nearly equal amounts of protein, magnesium, and phosphorus.

When you look at rainbow trout, both farmed and wild are nearly the same nutritional profile. The protein and calorie count are similar. Farm-raised have more vitamin A and selenium, while wild-caught have more iron and calcium.

There’s no across the board clear winner here.

This is an area most of our food supply has been wildly changed in the last half-century. The wheat, corn, and most fruits and vegetables we’re eating are all very different varieties than our great-grandparents ate.

Many people assume the same is true of farm-raised fish, but there are currently no genetically modified fish for sale as food in the United States.

If GMOs are your only concern, you can feel fine buying farm-raised or wild caught fish.

This is another aspect where it’s difficult to define a clear winner.

Wild-caught fish are sometimes caught using methods that do a lot of damage to the eco-system and other fish. Add to that the issue of overfishing which caused many species to get to dangerously low levels.

Farm-raised fish can pollute the water and tend to threaten local flora and fauna. For instance, the mangrove swamps are being destroyed to make space for shrimp farming.

The United States has enforced regulations to protect both wild-caught and farm-raised fishing operations. For instance, the National Oceanic and Atmospheric Administration watches wild-caught fishing to protect from over-fishing. Fish farms are also regulated, making sure any water leaving a fishery is cleaner than when it went in.

A 2004 study found that PCBs (a potentially carcinogenic chemical) was found 10 times higher in farm-raised fish than wild-caught fish. Subsequent studies haven’t found quite that broad of a difference; however, they are still more common in farmed fish.

However, mercury is also a concern when it comes to fish. The biggest concern comes from wild-caught fish. For this reason, it’s good to limit fish like swordfish, tilefish, tuna, and shark.

But then we get down to the deal breaker for me – antibiotics and hormones.

That was the nail in the coffin for me. Rather than try to figure out if that farm-raised fish was raised well, I find it easier to eat wild-caught as a rule.

I understand that everyone’s views and most important factors in their choices vary though. If you need some guidance at the fish counter, I recommend the Seafood Watch Program. It’s constantly updated with best choices based on all these factors. And they have an app to help you on the go!

Do you eat fish?