How to Get Rid of Smelly Armpits

So. How was your weekend? I spent mine detoxing my armpits. Letting that sink in… Seriously. I spent the weekend with Bentonite Clay spread on my underarms. They smelled. And they did not smell like flowers. Now I’m going to tell you how to get rid of smelly armpits because mine aren’t smelly anymore.

How to Get Rid of Smelly Armpits

Hey, I live in Texas. It’s been triple digits for the last week. It was time. I first read about doing an armpit detox a few months ago, and I immediately had to try it. It was awesome. In fact, so awesome that I had to share.

But, like I said it’s been awhile. And I (like an idiot) went back to using less than natural deodorant. Because 100+ degrees. I was sweating out my elbow pits. And I noticed, not-so-subtly, that my pits STANK. I smelled like a men’s locker room after the big game.

So I decided it must be my deodorant (remember that I’ve already detoxed…but I didn’t stick with my normal natural deodorant and I’m now kicking myself). I immediately tossed the name-brand stuff in the trash and grabbed my handy crystal deodorant that has served me so well.

Except, this time it didn’t. So I did what any sane person would do-I applied some Purification directly to my pits.

I highly recommend diluting if you choose to go this route.

Thankfully, it worked. For a bit. And then it didn’t. If my oils couldn’t stop this funk, I knew I was in trouble.

So it was back to the drawing board. This time, I tried some Lime essential oil. And it smelled so delicious. Until it didn’t. Then I tried Lemon, Tea Tree, and Grapefruit. All flops.

I just couldn’t see how and then, I had the brilliant idea to detox my face (I’ve been breaking out a bit due to some inadvertent gluten), so I grabbed my Bentonite Clay. And then, it hit me. A detox! 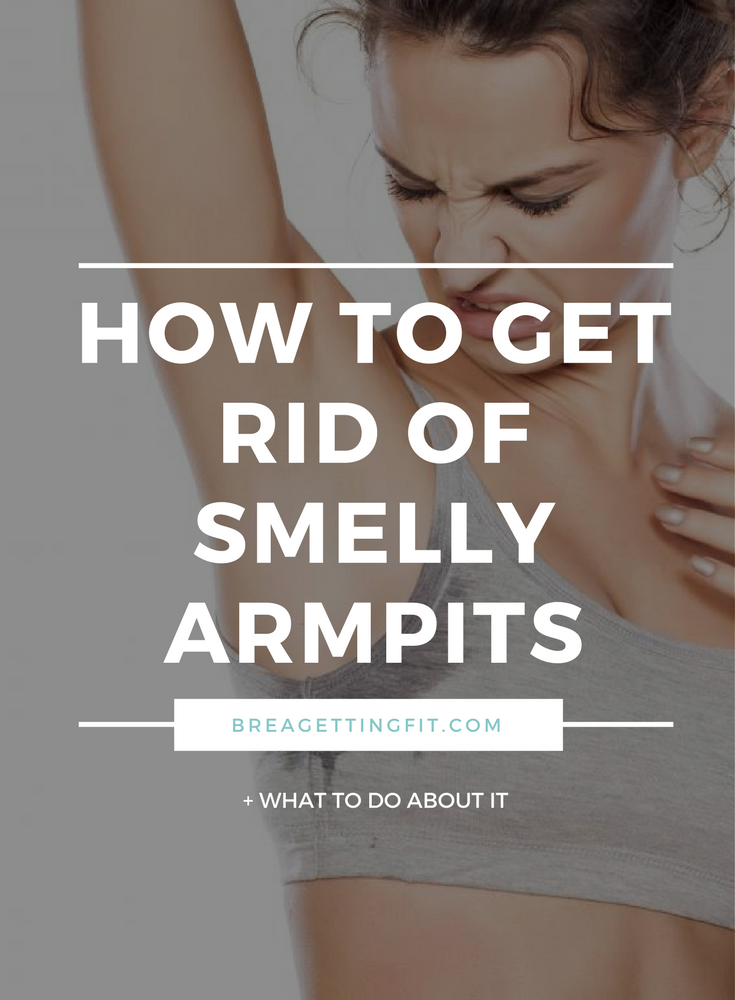 So, on Saturday, I mixed up a big batch of my “get rid of smelly armpits” masque which consists of exactly two things:

And then I applied (face first, because EW.).

Smalls asked me why my face and armpits were green.

I told him I was turning into an alien.

He ran screaming to his room and Woke Up The Baby.

After 5 minutes, I hopped into the shower to rinse. I also make sure to actually shower, since we had Smalls’ birthday party to put on later.

After I showered, I dried off, got ready, and sniffed…not a whole lot! This was good!

And then Sunday came…and it was back. The funk. Gross, I tell you.

This time, I was pulling out the big guns. Do not pass go, do not collect rent money in some board game.

I was putting my special mask on these puppies until it was dry.

Bentonite clay benefits your body by helping to expel many of these toxins and therefore increases immunity and reduces inflammation. source

I should have stopped at 10 minutes when it was mostly dry.

But I went full-tilt because I wasn’t about to have smelly pits anymore. I’m a LADY. Fast forward to rinsing the mask off….

And wow it detoxed! My armpits were red and slightly tender for nearly 24 hours.

But you know what? They don’t smell!

The moral of this story? When it comes to detoxing, ease in, y’all.

Have you detoxed to get rid of smelly armpits?

Why You Should Try Oil Pulling

Why Do You Get Canker Sores?

How I Helped My Hypothyroid Symptoms With A Paleo Diet
Posted in Fit Body, Natural