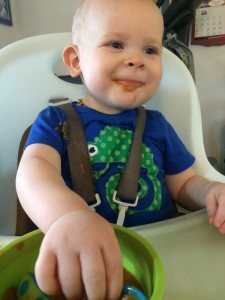 From a developmental perspective, chewing is a huge milestone! But if you don’t teach your baby how to chew…it can be scary. Ideally, you would be able to offer a gradual texture progression as you introduce purees to help your baby make an easy transition to actual solids….

I know you’ve heard of “second child syndrome,” and for better or worse, The Baby definitely has it. I remember with Smalls I was so careful about properly pureeing all of his foods, offering one food at a time, and going slow.

In fact, Smalls’ first food was actually sweet potatoes, steamed and mashed. And then life happened, Smalls got sick, and we had The Baby. And I realized that this time was going to be a lot different. I was exhausted, dealing with PostPartum Depression, and everything was overwhelming. For months.

So when it was time to start solids, while we did wait until 6 months, I wasn’t nearly as intentional. I shopped by age, and was careful to purchase individual fruit and veggie purees to start. One fateful shopping trip, I purchased a blend that fell within his age range, and after that The Baby flat out refused to eat plain old carrots, sweet potatoes, or apples again. 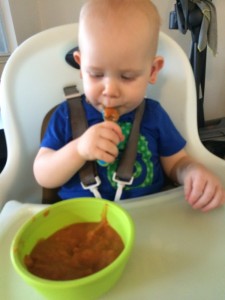 He knew there was something better out there!

As he grew, he wanted so badly to feed himself, so we tried pouches. Those worked well until he realized he could shoot them like a cannon. We had white carpet. Enough said.

Once he got the hang of pouches, I started to try some actual solids…which was a huge, huge mistake.

Instead of eating the food (banana) like I thought he would…The Baby just stuffed as much as he could into his cheeks. Until he was near choking.

I know some of you can relate!

Back to the drawing board. Or at least, that was my hope. Unfortunately, with our ‘whole food’ experiment, The Baby learned that he can feed himself. And he liked that independence! 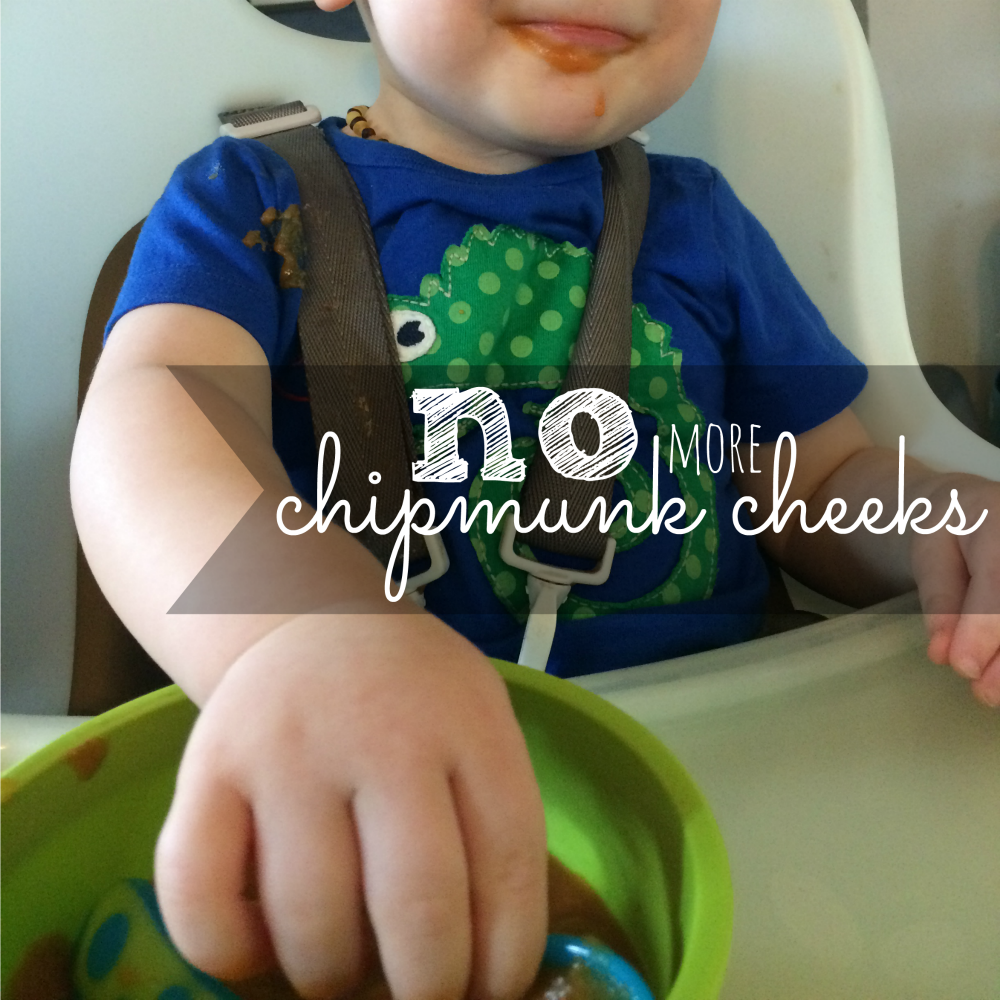 I thought we could just go back to pouches…but he pitched a huge fit. He wanted to feed himself. Really feed himself-spoon and all, apparently. Thankfully, we had Gerber’s 3rd Foods® Lil Bits™ Recipes in Sweet Potato, Apple, Carrots & Cinnamon.

Now, The Baby loves anything with sweet potato. I’d even venture to assert that sweet potatoes are quite possibly his favorite food. But helping him feed himself? And, more importantly, learn to take reasonably sized bites and actually understanding how to chew his food.

That is the big deal for me! No more chipmunk cheek stuffing! 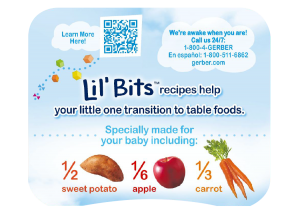 At first, I tried to feed The Baby his Gerber’s 3rd Foods® Lil Bits™ Recipes, and found that (not surprisingly) he was not amused. So I grabbed one of his toddler spoons (when did he get so big?!), and he went to work. 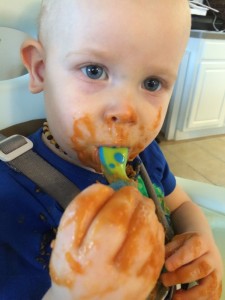 He could not shovel the food in fast enough!

Fun Fact: Gerber baby food must live up to over 100 quality checks because Gerber has always believed that little ones deserve high standards.

And I was thrilled to see him actually masticating instead of stuffing! I think that something about the actual texture of the lil’ bits helped him understand what he should be doing. I wish I’d known that I should be introducing smaller bits of food sooner.

Babies who are not exposed to small lumps or bits that require mashing and chewing prior to 10 months of age may have trouble transitioning to more advanced foods. Which is exactly what we experienced.

If you have a little one who’s starting solids, be sure to participate in the Gerber Chew U Instant Win Promotion. Enter daily to for a chance to win!

What tips have you learned about starting solids?

I received Gerber’s 3rd Foods® Lil Bits™ Recipes and compensation from Gerber as part of a sponsored program. All opinions, as always, are my own.