How to Sleep Better

I’ve been learning a lot about sleep and rest this month. I’m taking my Year of Rest seriously, folks! I could tell my body and brain needed way more rest than I had been allowing.

Usain Bolt, who was won nine Olympic gold medals in sprinting, credits sleep as a major part of his training routine. He says, “Sleep is extremely important to me. I need to rest and recover in order for the training I do to be absorbed by my body.”

I figured if an Olympic athlete can recognize how sleep affects his performance, it probably affects me too.

The sad thing is one-third of Americans don’t get sufficient sleep on a regular basis. While this study only took into account those getting less than seven hours of sleep at night, that is really the minimal requirement. Many people, especially athletes or people with highly physical jobs, need more sleep each night to function at their peak.

Pulling one all-nighter can reduce reaction times by up to 300%. While I hope you aren’t often staying up all night like a college student, the reality is that we forfeit sleep for a lot of reasons. As a parent, it never fails that I’ll stay up later than I should to work on a project and my kids will choose the same night to wake up multiple times.

Studies show that being sleep deprived for 22 hours can have the same reduction in reaction time as drinking four beers. I wouldn’t be driving, working, or parenting drunk. Why would I try to do those things functioning on little sleep?

This test is a fun way to test your reaction times. After sleeping seven hours last night (the minimum “approved” length), I scored in the cautionary range. I’m interested to try it again on a day when I’ve gotten more rest to see if I improve.

Studies have shown that student athlete injuries nearly doubled following a night of less than eight hours of sleep.  This could be due to a weakening of the body caused by lack of recovery time. Or it could be caused by impaired decision making skills due to fogginess from the lack of sleep.

Auto accidents are also doubled by people sleeping six to seven hours at night, according to a study by the AAA Foundation for traffic safety. Frighteningly 60% of Americans report that they have driven while feeling drowsy in the past year; one-third of those drivers have fallen asleep at the wheel.

Scientists at the National Institute of Occupational Health of Norway found that when subject’s sleep was restricted they had a stronger reaction to pain. For someone trying to build up their strength, this could lead to stopping sooner in a workout than you would if you were well rested.

One way to rest better at night is to invest in a quality pillow. But y’all. There are a lot of pillows out there. So how do you figure out which pillow is right for you?

The first thing you need to concentrate on is how you sleep. Usually the position that you wake up in is the position you sleep in. So. 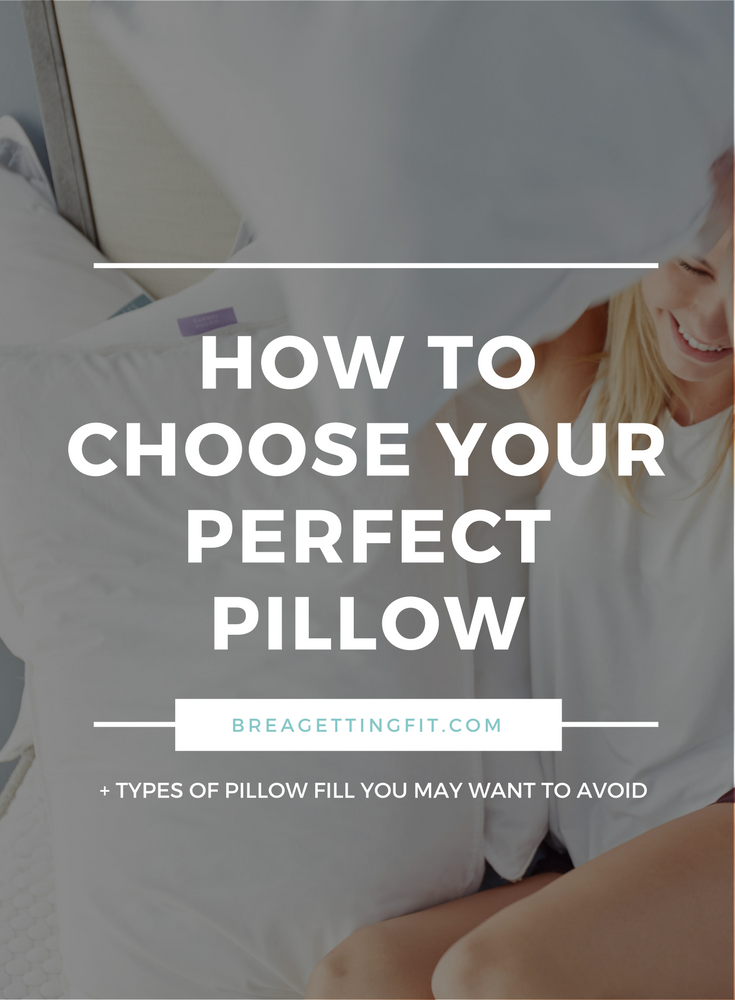 For the back sleeper: If you sleep flat on your back, you are going to want a thinner pillow so your neck isn’t thrown forward causing pain. You may want a molded pillow that has some extra thickness towards the bottom to help support the neck.

For the side sleeper: Side sleepers are going to want a firmer, thicker pillow to better support them. I’m a side sleeper and I find that having an extra pillow between my knees helps keep my spine in alignment, helping me avoid back pain the next day.

There are So.Many.Options when it comes to what is inside your pillow. Seriously, y’all. It can be super overwhelming. If you’re like me, it may take a bit to find your perfect fill:

While feather pillows are quite fluffy and moldable, some people may be allergic to the feathers like I am. If this is the case, its best to avoid them altogether, even if they claim to be allergy free.

Like feather pillows, down pillows have the benefit of being moldable while also being soft. There is still the possibility of allergy though, so beware if that’s something you struggle with.

Generally, the cheapest pillows you find will be filled with polyester. While it’s not likely you’ll be allergic to polyester, it does seem to trap dust and dander more easily than other pillows.

Memory Foam pillows are generally molded to a shape which then reacts to your body heat to mold further to provide exact support. It does have a tendency to trap heat, which causes difficulty sleeping for some people.

Latex pillows are breathable, hypoallergenic, and anti-microbial. They’re also my favorite. Latex doesn’t react to heat like memory foam does which means it tends to sleep cooler, which I love. I actually got to test out the Carmel Latex Pillow which is made of 100% latex which offers great support for those who like a firmer place to rest their head.

Ish is a side sleeper and loves his Hubby prefers Helena Latex Filled Pillow, which has  has ribbons of latex and kapok throughout that allows it to be fluffy while still offering support (unlike a feather pillow).

If you’re not sure what pillow would be best for you, Brentwood Home has an awesome (and limited time) Sleep Wellness Bundle that you may want to try. In fact, if you use the code OURHOME you will get a whopping 10% off your order!

And, I’m so very excited to be giving away a Sleep Wellness Bundle to one of my readers!! All you have to do is enter below: