How to Prevent Sudden Headaches

Do you ever get sudden headaches? The ones where you literally did not feel them or ‘see’ them coming?

I recently took a work trip/mommy vacation (more on that next week!), and I ended up having what felt like a blinding headache…most likely from exhaustion, but wow did it hit me hard!

My flight left early (6:o0 a.m.), and since I’m still adjusting to the airport being 90 miles away, I did not get enough sleep the night before.

Honestly, does anyone sleep well the day before an awesome trip?

I was basically running on fumes…which isn’t good when you have plans to conquer 3 Disney Parks in 2 days (sorry Hollywood Studios!).

Headaches are awful. They hurt, they pinch, they make light the enemy…exactly what I did not want to be dealing with while in sunny Florida…especially after all the snow we’ve been having in Michigan!

Now, I realize that I’m lucky. What I ended up with was just a sudden headache…and it could have been much worse.

Now, I’ve only had migraines a few times in my life, but the pain, vision problems, and nausea are near torture.

Interestingly, in doing some research for this article, I found that migraines affect about 15% of adults, which means they’re fairly common.

Many foods and drinks can trigger migraines…which got me thinking. What if these same foods also affect sudden headaches? (Have you tried Whole30?)

Personally, if I don’t treat a sudden headache as soon as I realize what’s happening, it can turn into a migraine.

I got to wondering about how on earth food could have such an effect on my head. But it turns out that when your brain’s blood vessels constrict and then dilate, things get uncomfortable.

I’ve also noticed that I can (fairly accurately) predict a headache based on what I eat (or more importantly should not eat). 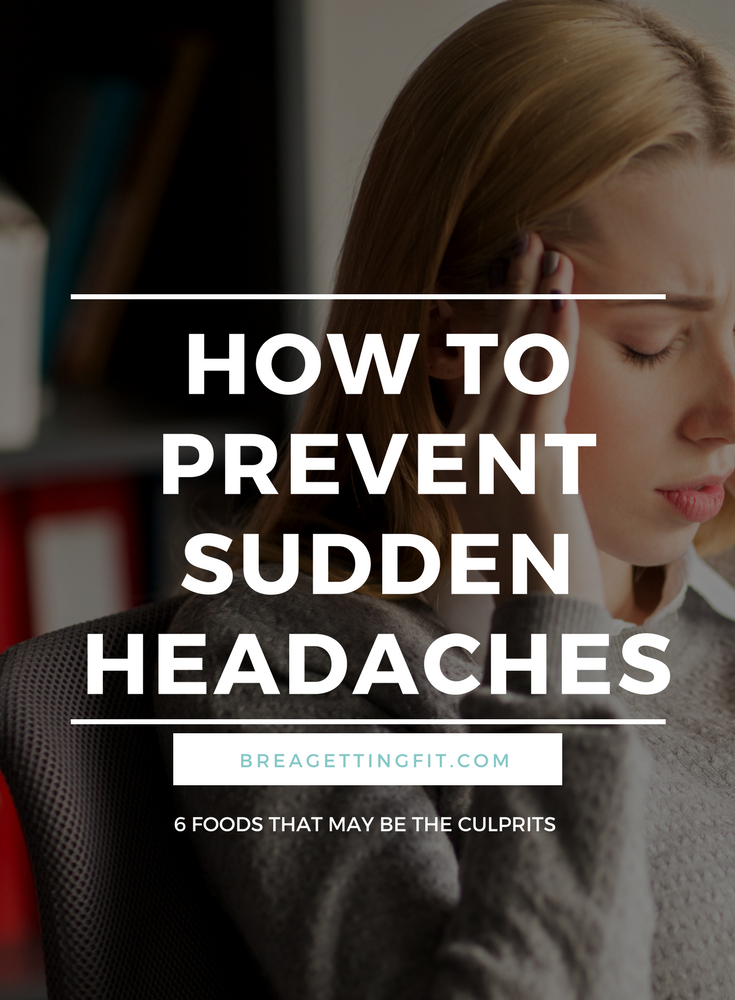 If you’re a cheese lover who has headache issues, this is probably going to make you sad…but hard cheeses like cheddar and Swiss contain an amino acid called “tyramine” (aka the protein found in cheese). Foods high in tyramine are generally aged, cured, dried, smoked, or pickled, including cheese (duh), sauerkraut, pickles, and tofu.

Foods like hot dogs, lunch meat, and bacon contain nitrates and nitrites that can cause your blood vessels to dilate, which can cause a headache or a migraine.

Not to mention that nitrates and nitrites have been linked to things like colon cancer. I recommend picking up nitrate free bacon and cured meats-which you can usually find in the natural section of your grocery.

I haven’t been able to get a straight answer on this one…but since it came up more than once in my research, I’ll include it here. Some suspect that the caffeine is the issue, which others point to the rapid rise and fall of blood sugar associated with processed sugars and sweets.

My go-to sweet treat right now are these Keto Strawberry Cheesecake Fat Bombs. I know that when I haven’t had sugar in more than a week, I have to be really careful to not overdo it or (you guessed it) sudden (usually instant) headache.

MSG is most often found in Chinese food, so never be afraid to ask for a rundown of their ingredients for each dish.

Aspartame is commonly found in diet sodas and other processed foods. It makes things sweet without adding sugar or calories. So if you really, really want that Coke, it’s probably better to drink the real thing instead of the diet version.

I know it’s not really a food, but that hangover that you get when you have too much wine?

In fact, alcohol is a common trigger for headaches and migraines with red wine and beer being the most common culprits.

Some research suggests that some of the red wine’s compounds such as histamine, sulfites, or flavonoids may be the culprit.

Again, I know this isn’t really a food, but it definitely bears mentioning. Ish cannot stand to drink ice water because it causes him an almost instantaneous headache.

He prefers to drink his water chilled from the fridge without ice to avoid blinding pain.

Artificial sweeteners like Aspartame are another common trigger. Aspartame is in diet sodas and other processed foods to make them taste sweet without adding sugar. As with MSG, there is not a lot of research on its effects with migraines. But again, it is something to consider eliminating from your diet and see if that makes a difference.

Obviously, this isn’t an extensive list, but if you find that you are having a tough time or frequent headaches, it may be worth eliminating one food at a time to see if it helps. Remember, the top offenders are:

Do any of these trigger sudden headaches for you?