What is Seasonal Affective Disorder? (+ How to Cope)

Our clocks “fall back” November 6, 2016, which means that there will be less daylight. Now, I’m the first to admit that I have a special hatred for Daylight Savings Time in general…and not because a majority of my work revolved around sleep for nearly 5 years. It’s more because I don’t understand the take an hour and then give it back.

I mean, I am sure that in 1883 when DST became law it made sense…but now? I’m not so sure. But that rant is not my point today, though it does feel good to get it out. I think that the loss of daylight has a huge impact on a whole lot of people…including me.

If you’re like me, you chalk up feeling “blue” or “down” during the winter to just being really cold and a lack of sunshine. Apparently, I’m not alone. Between 4 and 6 percent of people may have “winter depression” which is clinically referred to as Seasonal Affective Disorder. And, another 10 to 20 percent may have mild SAD. Y’all. That means that 14-26% of people have seasonal depression. That’s not good!

Seasonal affective disorder (SAD) is a type of depression that’s related to changes in seasons — SAD begins and ends at about the same times every year. If you’re like most people with SAD, your symptoms start in the fall and continue into the winter months, sapping your energy and making you feel moody. Less often, SAD causes depression in the spring or early summer. source

In most cases, seasonal affective disorder symptoms appear during late fall or early winter and go away during the sunnier days of spring and summer. However, some people with the opposite pattern have symptoms that begin in spring or summer. In either case, symptoms may start out mild and become more severe as the season progresses. source

SAD doesn’t necessarily present as typical depression, in fact, I thought that my thyroid was out of balance again. Thankfully, it wasn’t…I was just dealing with some symptoms of SAD. Symptoms to watch for include:

Many people with SAD will find that their symptoms respond to a very specific treatment called bright light therapy.

Researchers at more than 15 medical centers and clinics in both the U.S. and abroad have had much success with light therapy in patients with clear histories of SAD for at least several years. Marked improvement is usually observed within a week, if not sooner, and symptoms usually return in about the same amount of time when the lights are withdrawn. Most users, therefore, maintain a consistent daily schedule beginning, as needed, in fall or winter and usually continuing until the end of April, by which time outdoor light is sufficient to maintain good mood and high energy. Some people can skip treatments for one to three days, occasionally longer, without ill effect, but most start to slump quickly when treatment is interrupted. source

Light therapy consists of regular, daily exposure to a special “light box,” which artificially simulates high-intensity sunlight. Basically, this means that you spend 30 minutes sitting in front of a light each morning right when you wake up.

Or, if you’re like me and have things to do (packing kids lunches, making coffee, serving breakfast, and getting to work), light therapy glasses may be a better option for you. I’ve been using the ReTimer for about 6 months and absolutely love them. 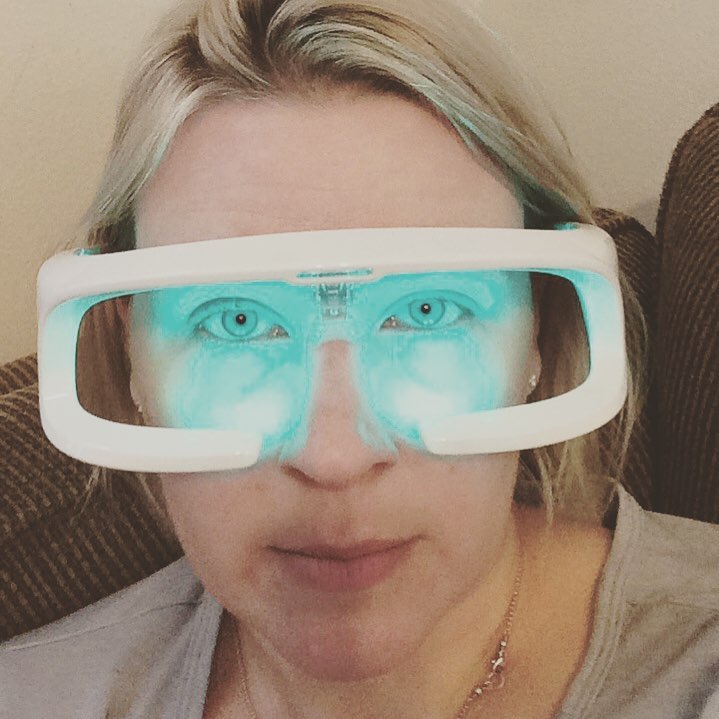 Sure, I look a little goofy, but it’s better than sitting in front of a box!

My therapist told me that if I didn’t feel better, I should add a second exposure of 20-30 minutes at lunch time.

Scientific studies have shown light therapy to be very effective when compared to placebo and as effective as antidepressants in many cases of non-severe Seasonal Affective Disorder. For me, I found that my ReTimer glasses worked a lot faster than the antidepressants my doctor prescribed.

So much so that I’m no longer taking them. Others may find that it takes a few weeks for light therapy to work, which can also be the case for most people who take antidepressant medications. Thankfully, I started both at the same time and was able to slowly discontinue the medication because of light therapy.

Obviously, a healthy lifestyle is a huge part of any alternative therapy. This includes regular exercise and a healthy diet (I strongly recommend the Autoimmune Protocol, Whole30, or the 21 Day Sugar Detox).

It’s also a good idea to connect with people whether that’s online or in person. Find your tribe. Having a strong social network is also likely to help you cope with Seasonal Affective Disorder.

Smells are carried directly to the brain, where they serve as emotional triggers. Then your limbic system evaluates the sensory stimuli, registering pleasure, pain, danger or safety. This, in turn, creates and directs our emotional response. Pretty cool, huh?

Grab some essential oils or even slice a lemon or a lime and boil some slices on the stove for their uplifting scent.

Individuals with a predisposition to bipolar disorder should be more cautious in approaching treatment for SAD and depression in general. Light therapy, like antidepressant therapy, has been associated with increased risk of experiencing a manic episode. The specifics of this are beyond the scope of my meager knowledge and should be discussed with one’s doctors. As always, I am not a doctor and I do not play one on the internet. The same goes for essential oils. I can only speak to the way I use oils for myself and my family. You should always do your own due diligence and research the crap out of these things.

Have you tried light therapy? Did it work for you?